Oscar Kureba, Pablo Moreno, Robert Reed, Xifeng Ruan and myself are attending the the Tile Calorimeter Upgrade week in Valencia. Matthew Spoor had to take off back to SA due to visa restrictions and can't attend. Yesterday Oscar, Pablo, Robert and Xifeng gave a bunch of tutorials to the community, see the snapshot of the agenda. The hands-on session took place at the lab in Valencia and was attended by a number of Tile Calorimeter experts. This session was quite important to get useful feedback for future development. 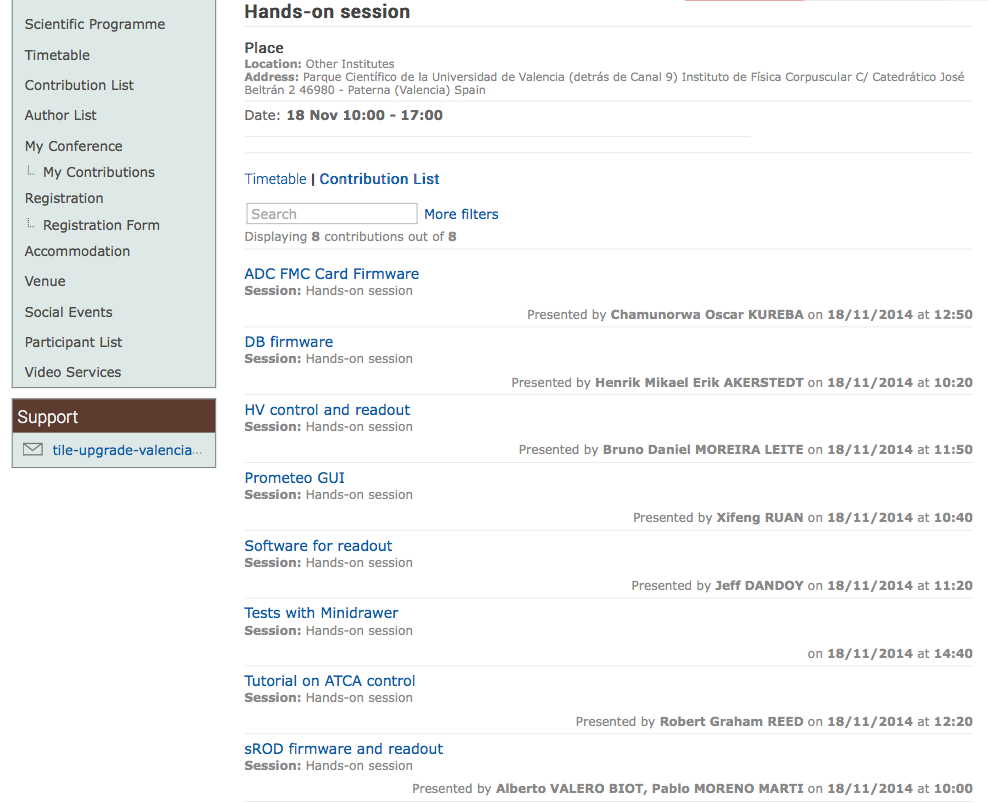 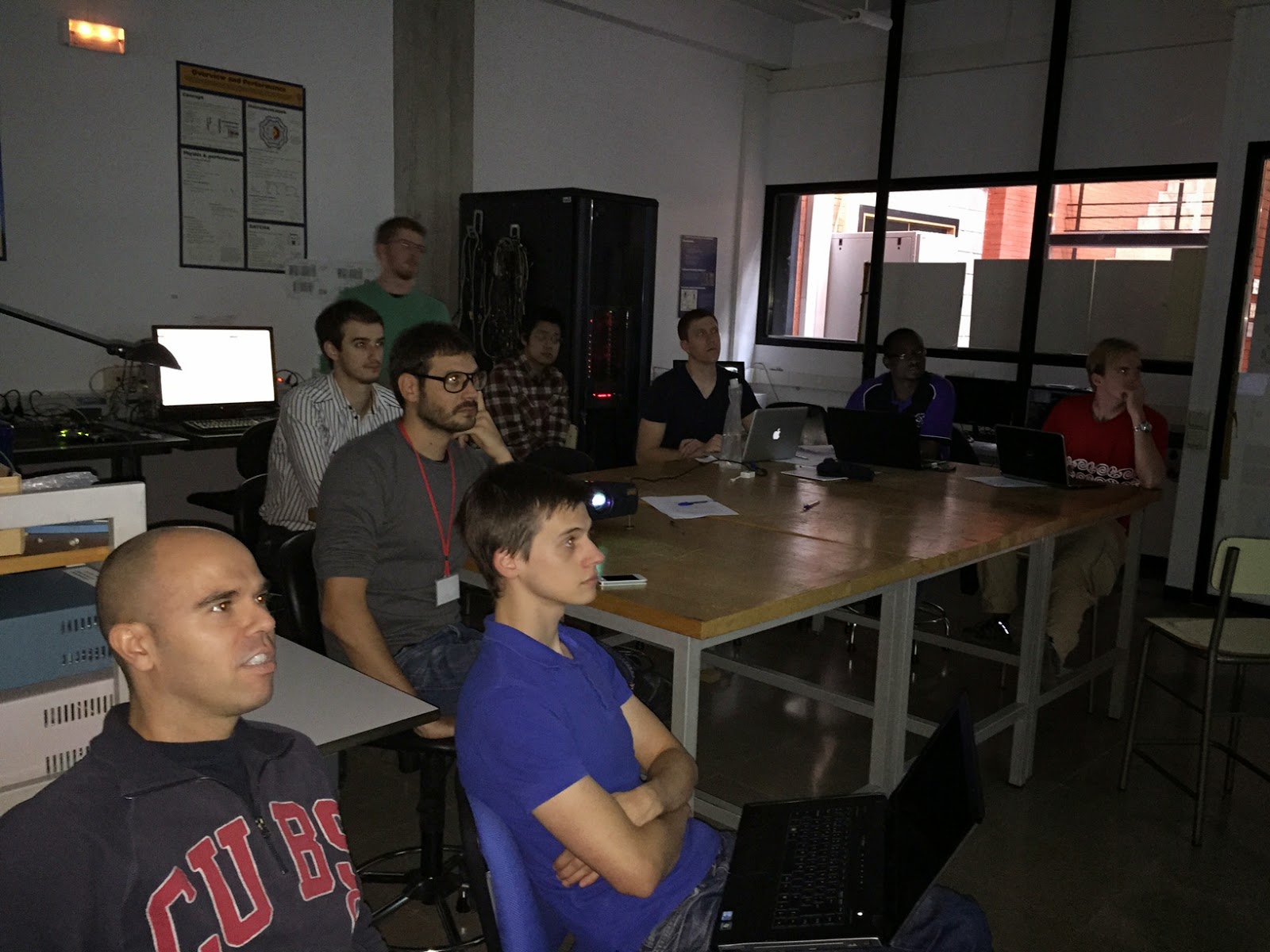 BY ERNA VAN WYK
The new state-of-the-art High-Throughput Electronics Laboratory (HTEL) in the Wits School of Physics is the exemplar for future scientific endeavours in South Africa.
The HTEL will not only play a big role in science and in developing high-end technologies, but it is also the blueprint for innovation where “like-minded scientists and colleagues who have a single-mindedness to change the world, will come together,” Professor Adam Habib, Wits Vice-Chancellor and Principal, said.
Speaking at the launch on Friday, 14 November 2014 – in the presence of leaders and representatives from the University, industry and the physics-related fields in South Africa, such as the SA-CERN Consortium, SKA SA, the CSIR, the Centre for High Performance Computing, and the Joburg Centre for Software Development, among others – Habib emphasised that the HTEL will show how scientists and universities in South Africa, and in Africa, can be “both globally competitive and nationally responsive”.
“The HTEL it is an institutional mechanism of a broader institutional community that spans nations, institutions, and sectors, and that will try to understand our world and change it,” Habib said. Listen to his address.
The new lab and facilities will be a platform for research and development of high-throughput electronics for the ATLAS detector at the Large Hadron Collider (LHC) at the European Organization of Nuclear Research (CERN) in Geneva.
Professor John Carter, Head of the School of Physics, said with the high resurgence of interest in physics and physics-related research, and with Big Science coming to South Africa, there is a need to cope with the “explosion of data” and to develop a platform for processing huge amounts of information. Listen to his address.
The laboratory is designed to deal with the problem of Big Data related to the processing of large amounts of data needed to produce new discoveries, following the observation of the Higgs boson at the LHC, to which Wits physicists also contributed. The study of the Higgs boson will require about a 100 times more data than used for the discovery, announced in 2012 – a discovery that led to physicists François Englert and Peter Higgs being awarded the Nobel Prize in Physics. This poses new challenges to the Big Data problem and requires the development of new solutions.
One of the founding fathers of the Atlas project, Professor Peter Jenni, praised the Wits Atlas Group for the establishment of the HTEL. Speaking via a video-conferencing link from Geneva, Jenni said the lab is remarkable and will have benefits well beyond Atlas. Listen to his address.
The spin-offs will be even greater
The science and technologies being developed to deal with big data will also lead to the massive production of electronic devices by South African industries based on the designs produced in the HTEL. According to Professor Helder Marques, Dean of the Faculty of Science, the HTEL-project also shows why science and education needs more investment in South Africa. Listen to his address.
Professor Bruce Mellado from the Wits Atlas Group and the High Energy Physics Group (HEP) in the School of Physics led the way in establishing the HTEL at Wits. He is very passionate about the technologies that will be developed here: “The first direct spin-off is the development of low-cost computers for the South African educational system – both for schools and universities. We are already in touch with a number of schools that will test our first prototype hopefully starting in January or February next year.” Prototypes shown at the launch also demonstrated that they can run sophisticated applications such as running a conference facility and a 3D-printer.
Mellado, an expert on the Higgs boson and a member of the ATLAS Experiment at CERN, says Wits is helping to establish a synergy between two Big Science fields in South Africa - CERN/ATLAS SA and the SKA SA. The first project was in January this year when Wits hosted the first High Performance Signal and Data Workshop. Over a hundred scientists gathered together from the two fields, including a large student contingent. The HTEL will take this work forward. Listen to his address.
The spin-offs are not limited to the development of low-cost computers. The high-tech solutions that will come from the HTEL will be very important for science and technology. The HTEL is developing general-purpose devices that can handle the processing of very large amounts of data in a cost-effective and compact ways. These devices can be used in a wide range of industries in South Africa and abroad.
Posted by Bruce at 16:49 No comments:

Erna Van Wyk, from the Wits Communication Team, has passed us some of the pictures that she took during the inauguration of the High-throughput electronics lab on November 14th. The lab was inaugurated by Prof. Adam Habib, Wits Vice Chancellor and Principal, who gave a smashing speech. Erna is making the audio available. Prof. John Carter, the Head of the School of Physics chaired the function. Prof. Helder Marques, the Dean of the Faculty of Sciences, also gave a great talk. Prof. Peter Jenni, former spokesperson of ATLAS and Dr. Irene Vichou, the Project Leader of the Tile Calorimeter of ATLAS attended the meeting remotely from Geneva. We were very pleased with their statements of support. The event took place at the Honours presentation room that is equipped with very a very nice conference facility.

Below some of the pictures: 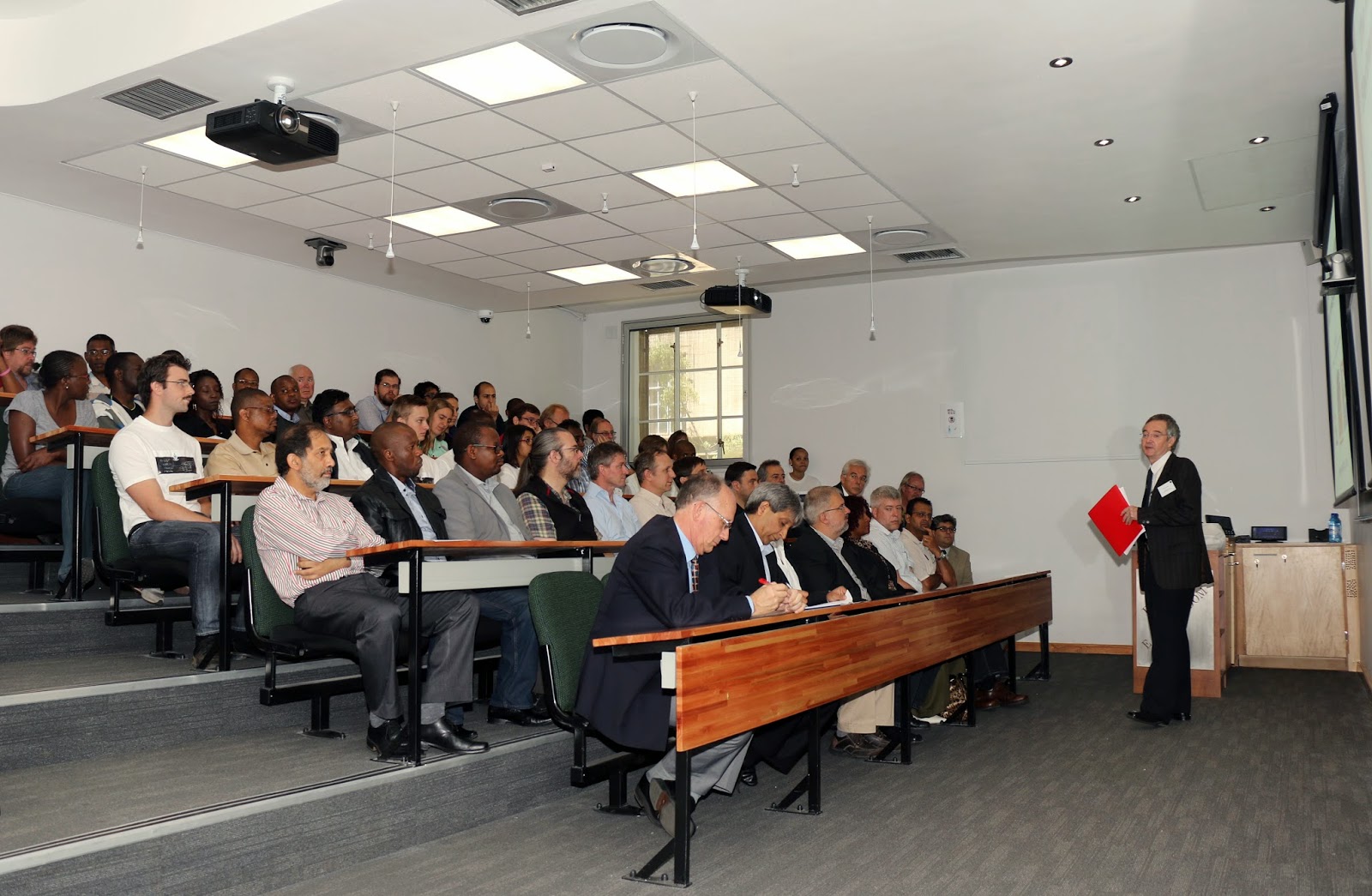 Another view of Prof. Carter's address. One can see the at the centre of the picture, Prof. Peter Jenni, Dr. Irene Vichou connected from CERN together with some of our post-docs and close collaborators: 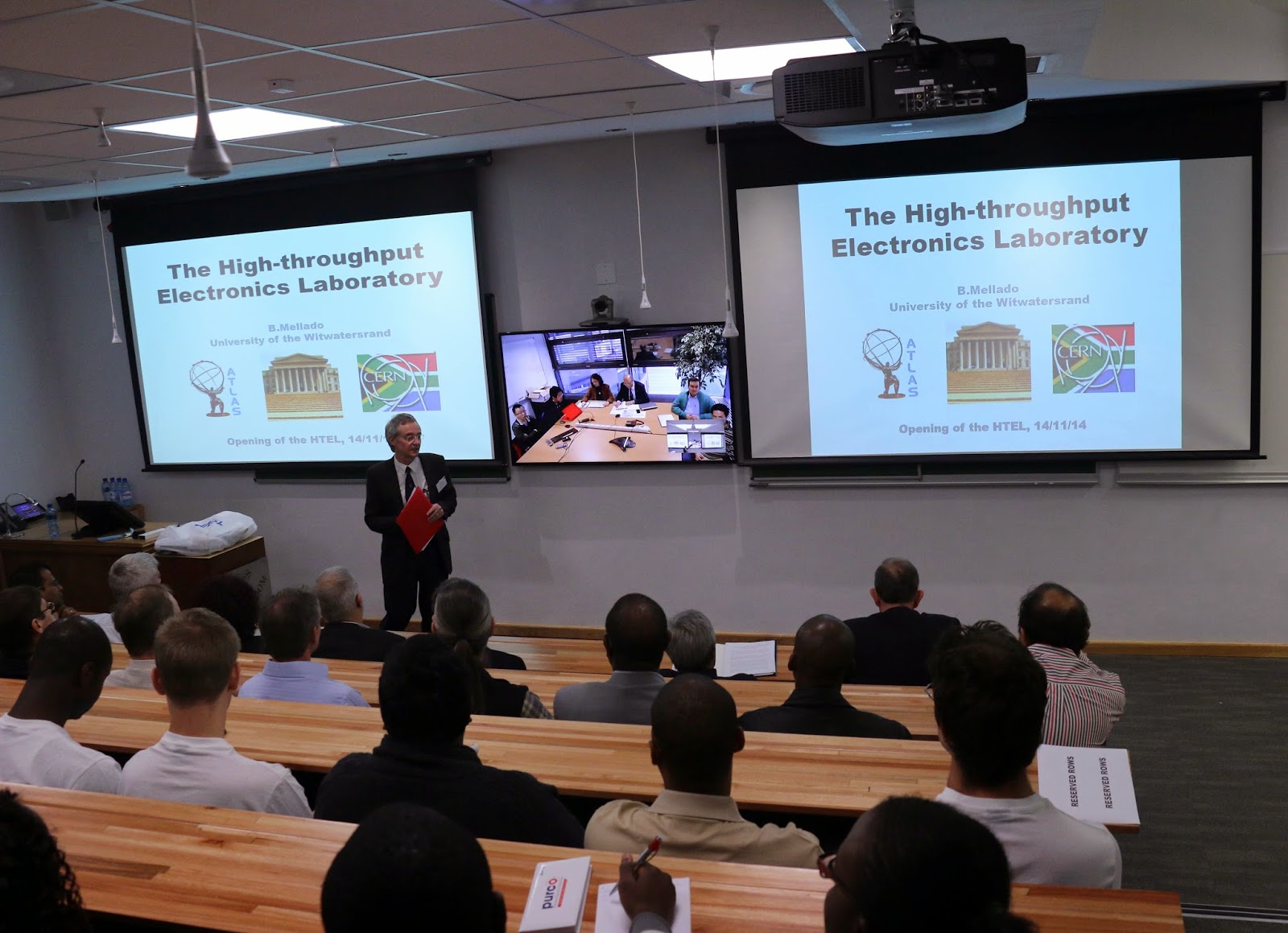 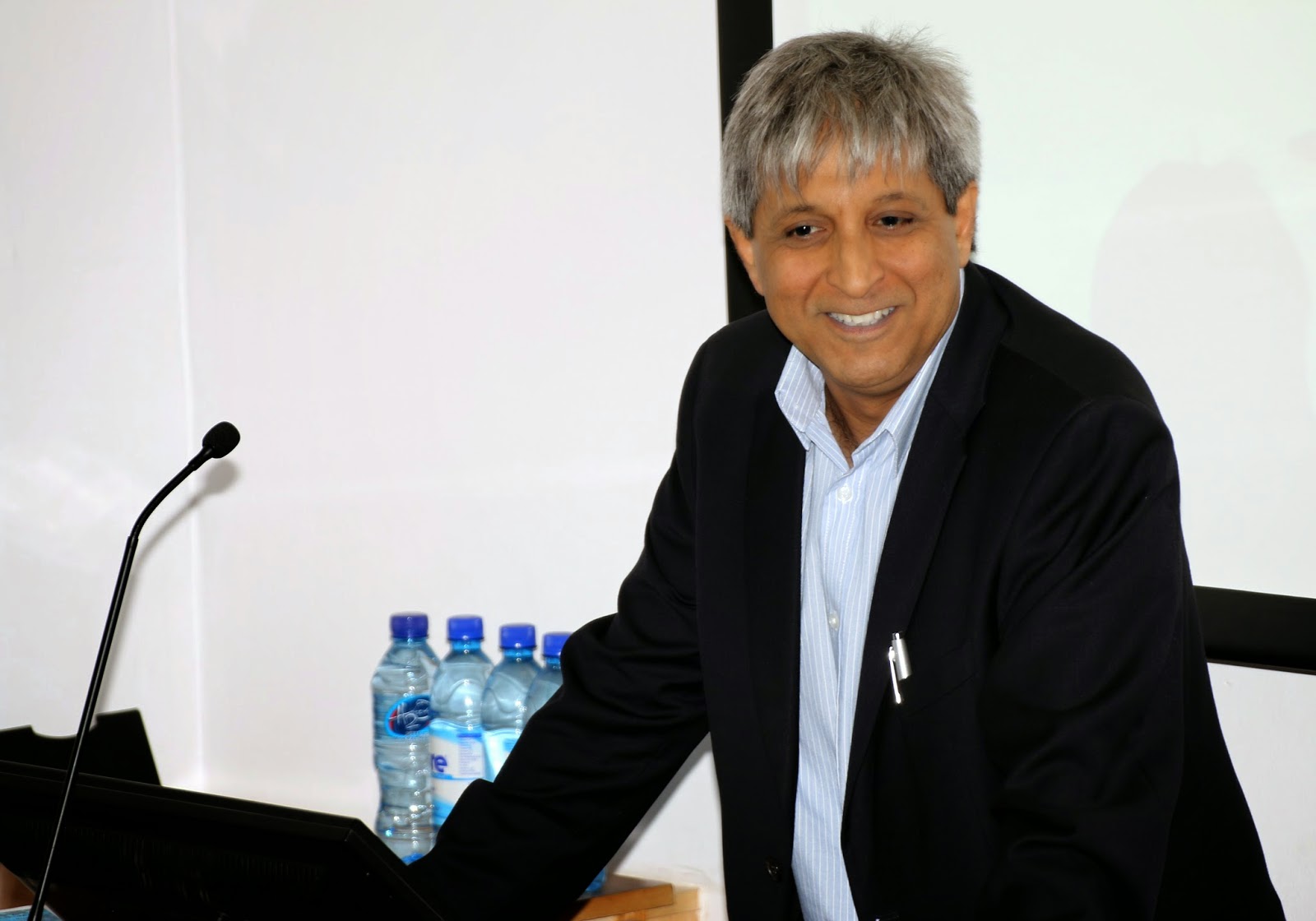 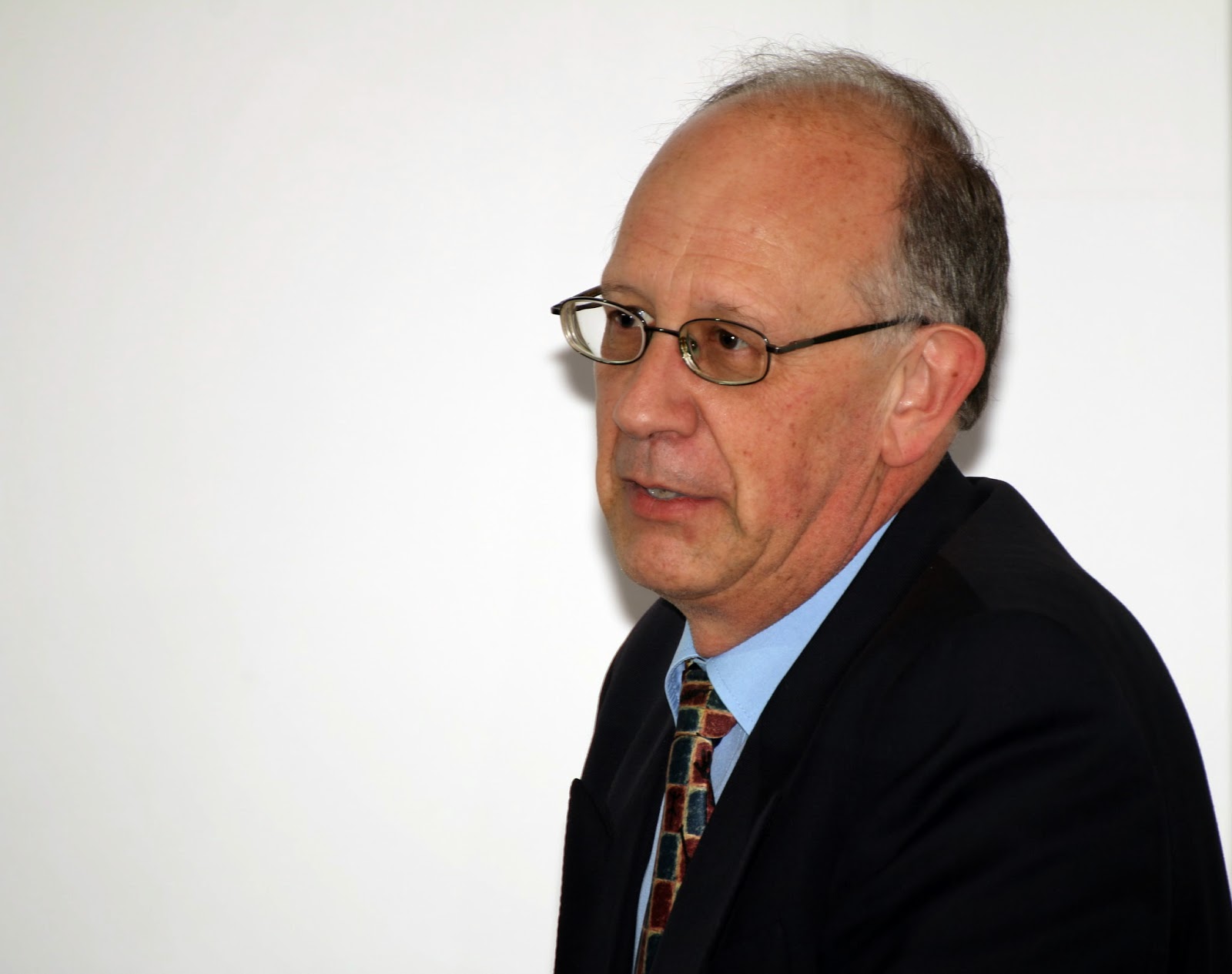 We were honoured to have Prof. Justin Jonas representing the SKA: 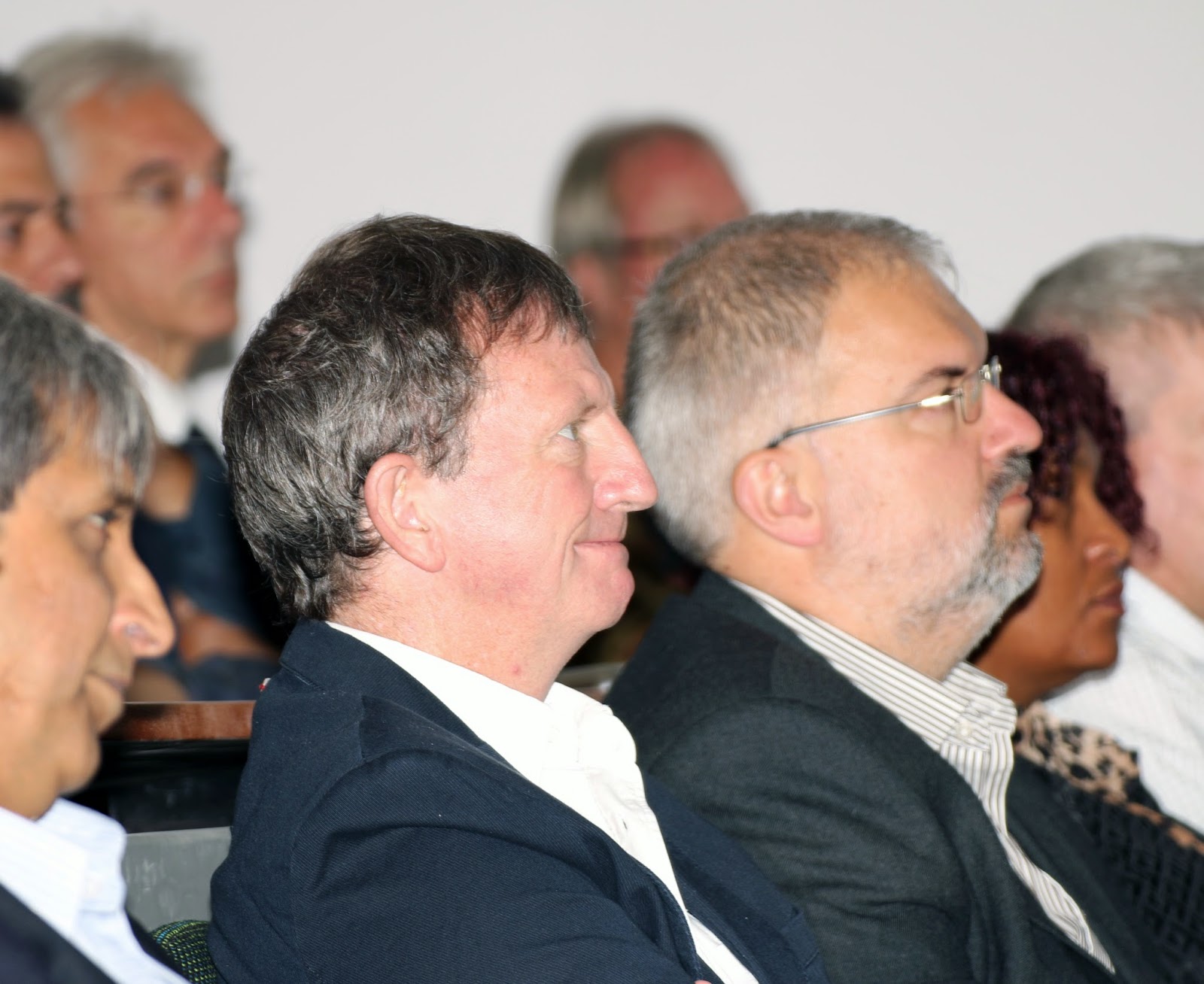 Right before cutting the ribbon: 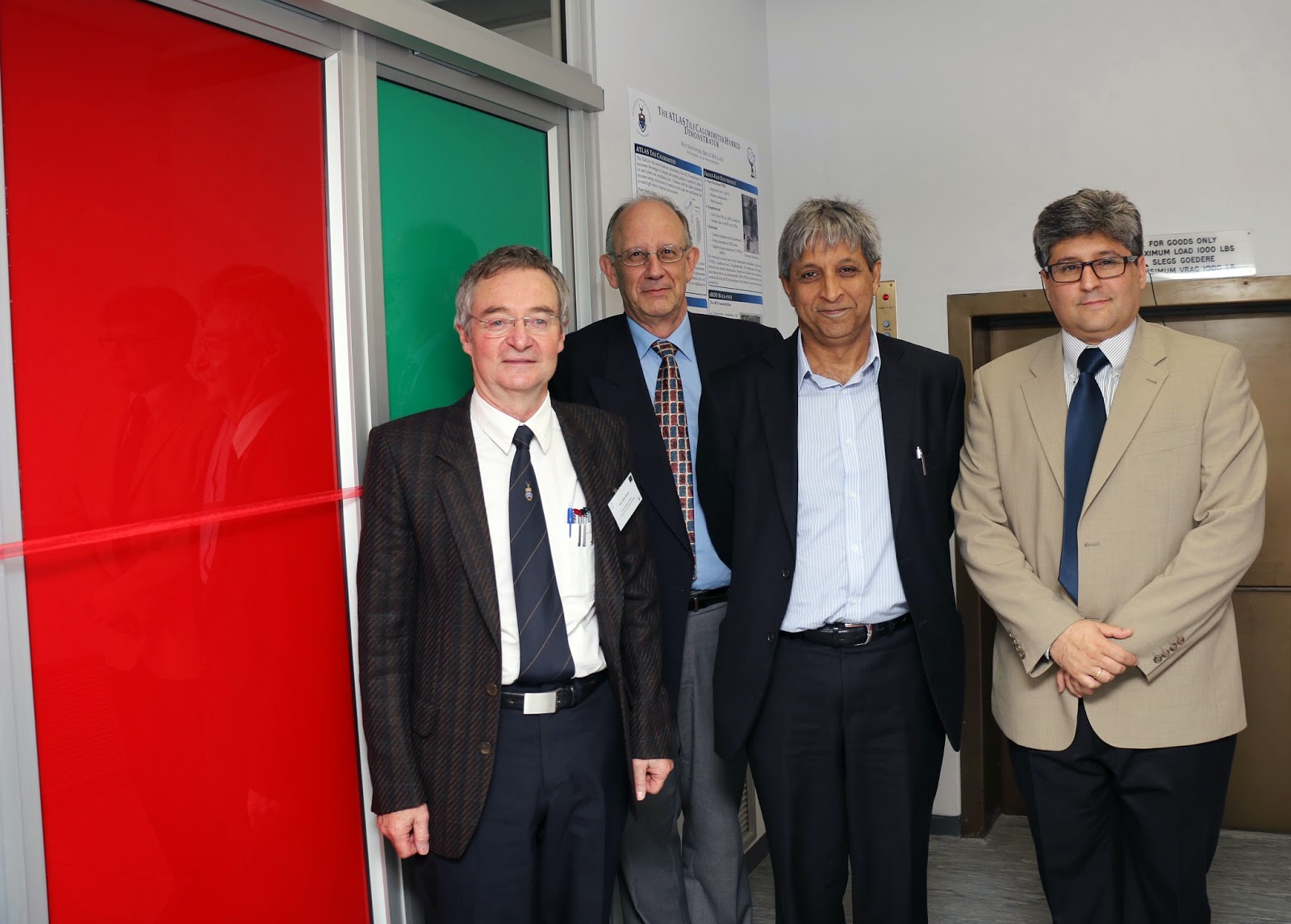 Right after Prof. Adam Habib cut the ribbon, students rush in to take positions for the demonstrations: 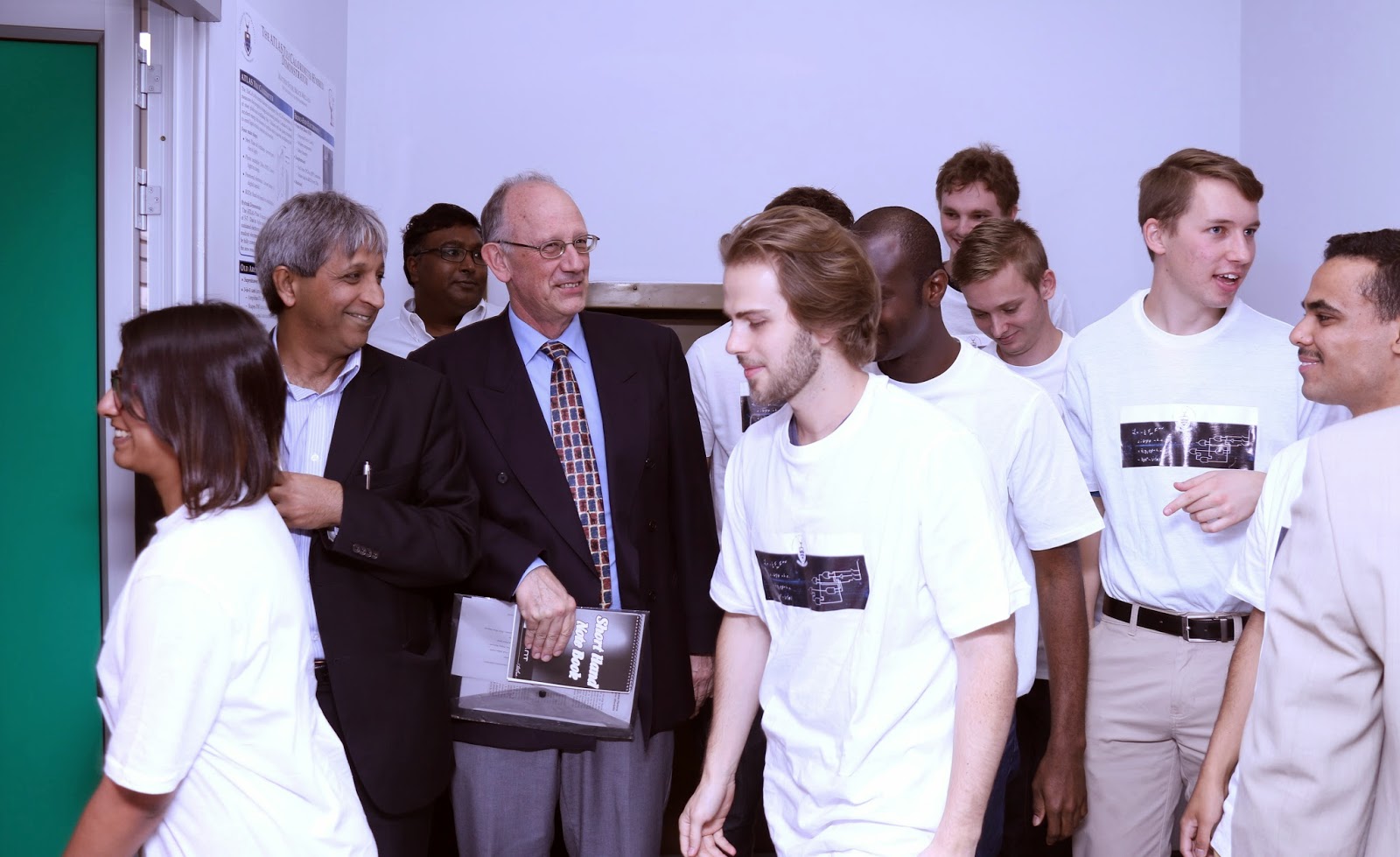 Mitch Cox talking to Prof. Adam Habib about his research in high-throughput electronics: 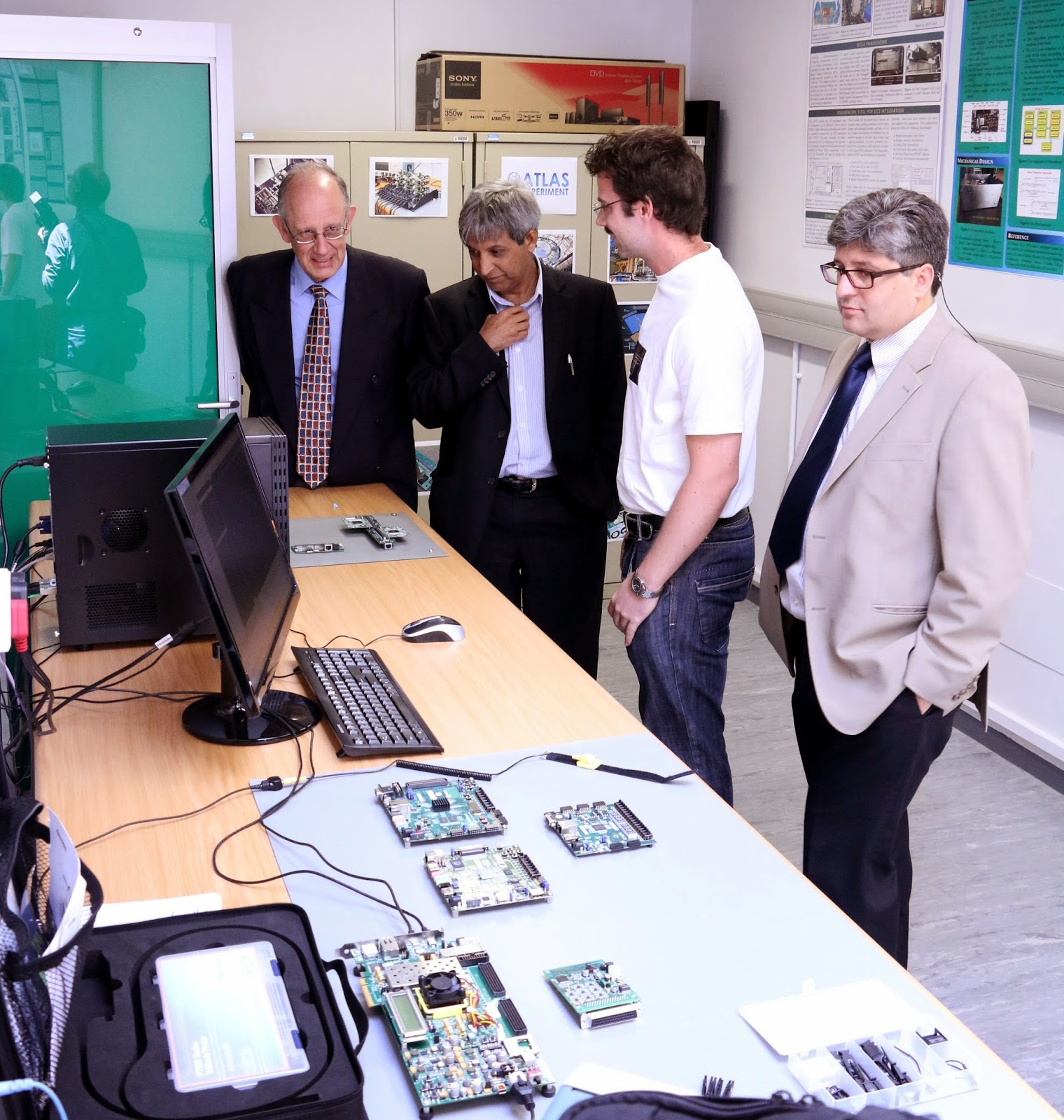 Prof. Adam Habbib addressing the students at the lab: 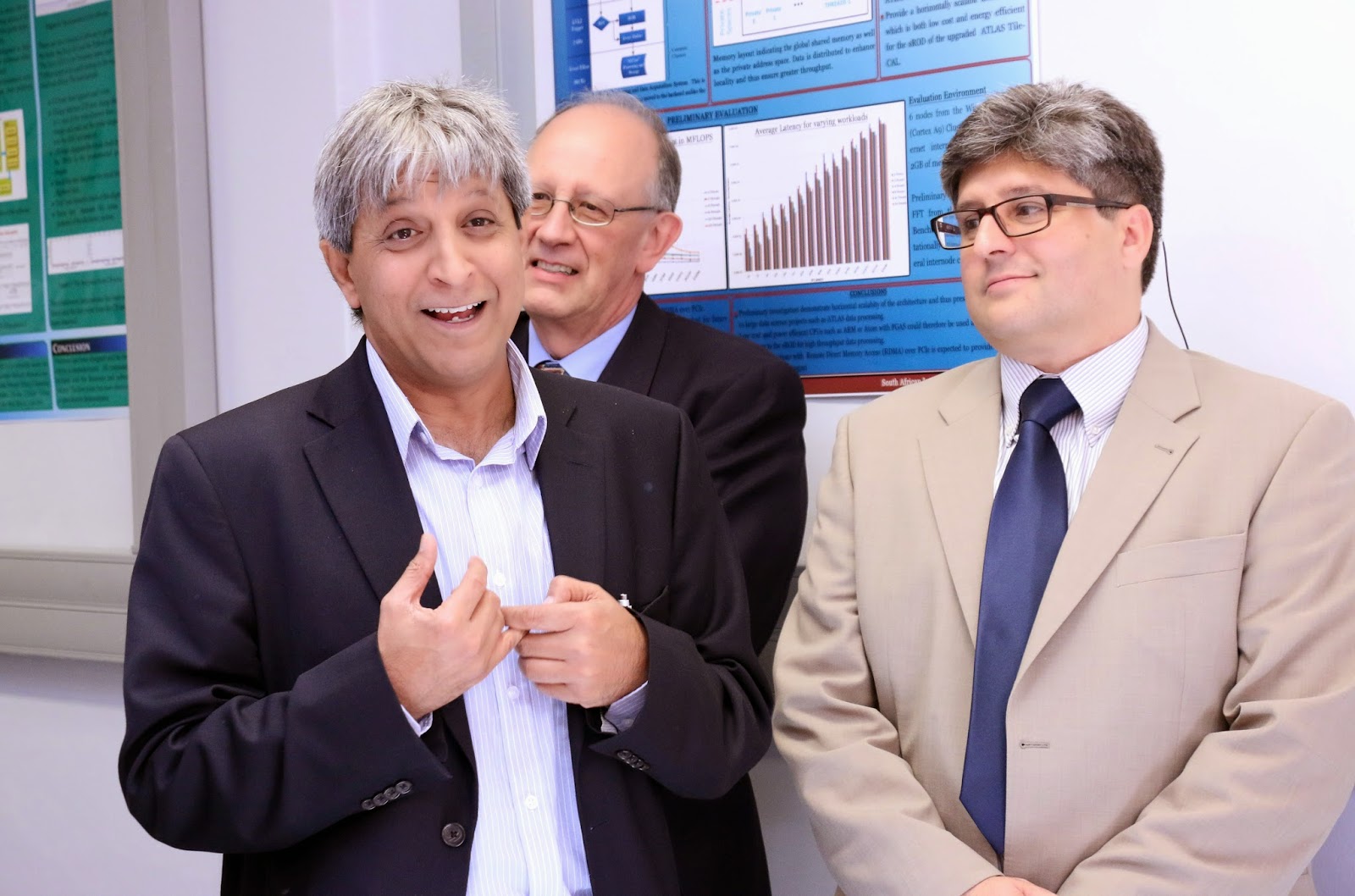 Matthew Spoor talking about his work on FPGAs to SA-CERN colleagues and a representative from Microsoft: 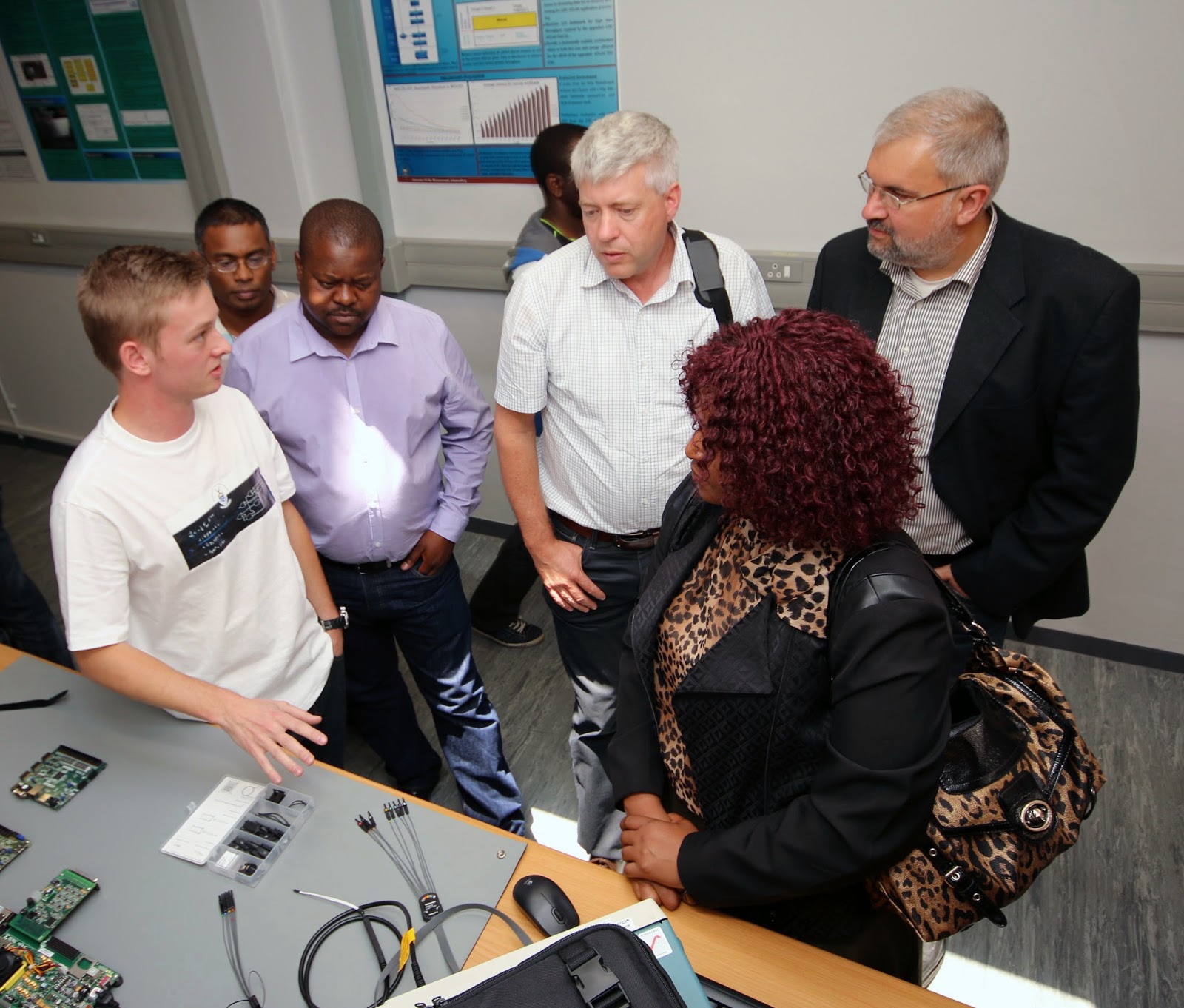 Harshna Jivan talking about the teams work on radiation studies: 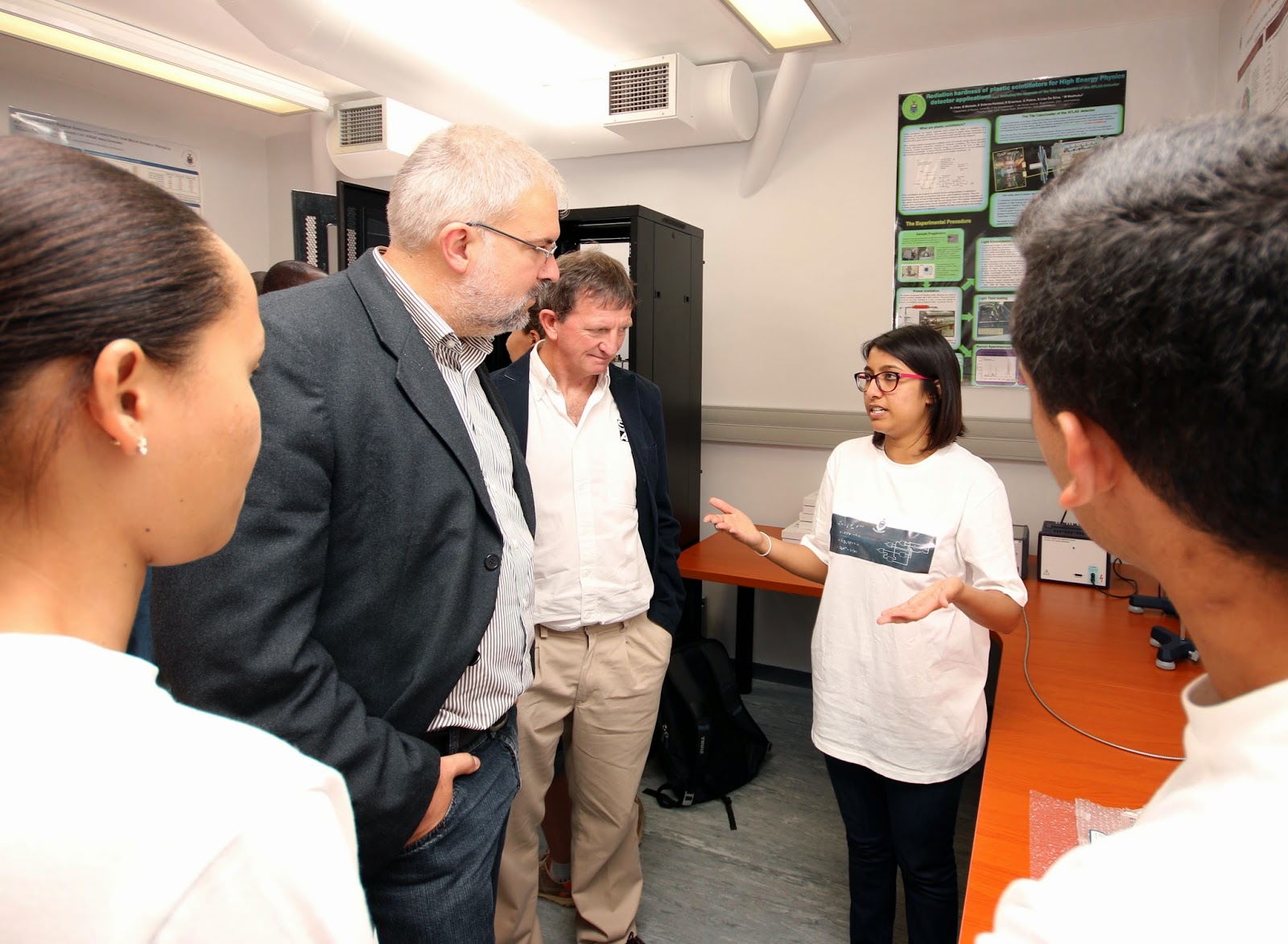 The Wits School of Physics invites all media to the launch of the High-Throughput Electronics Laboratory (HTEL) this Friday, 14 November 2014.
This state-of-the-art new lab and facilities at Wits will be a platform for research and development of high-throughput electronics for the ATLAS detector at the Large Hadron Collider (LHC) at the European Organization of Nuclear Research (CERN). The laboratory is designed to deal with the Big Data problem related to the processing of large amounts of data needed to produce new discoveries, following the observation of the Higgs boson at the LHC.
This work would lead to the massive production of electronic devices by South African industry based on the designs developed at the High-Throughput Electronics Laboratory (HTEL).
Date: Friday, 14 November 2014
Time:  09:30 for 10:00
Venue:  P213 (Honours Presentation Room), School of Physics, Physics Building, Braamfontein Campus East
RSVP: Christina Thinane on 011 717 6848 or Christina.Thinane@wits.ac.za
All media are invited.

About the HTEL:
High-throughput electronics deals with the huge transfer of data at very high rates in challenging environments, such as those with a high level of radiation, possibly event upsets and other factors that may produce data corruption. To “read” this data, very fast decisions need to be made in order to select and modify the large amounts of data at high rates.
This laboratory will first of all serve the needs for upgrade of the ATLAS detector and more specifically, the Tile Calorimeter. This ATLAS sub-detector enjoys strong commonalities in the way data is transferred and how the off-detector electronics are designed.
But it is not only ATLAS that will benefit. South Africa’s flagship big science project, the SKA, also faces the same technological challenges related to high-throughput data flows with fast processing common to that of the ATLAS detector. Prototypes of fast-electronics and computing developed for the ATLAS detector could also be used by the SKA.
A spin-off of the design and prototyping work being done for the ATLAS project is the development of the Massive Affordable Computing (MAC) project. One of the limiting factors for harnessing large computing capabilities is the cost: High-performance computers are not cost-effective and need to be imported to the country. The idea behind this project is to develop prototypes for high-performance computing with cost-effective components for a very wide range of applications in research and industry.
A first spin-off of the HTEL is the development of a mini-PC, catering to the needs of the educational system of South Africa. Few prototypes are currently available and are being tested at the HTEL. These incorporate power efficient and low-cost technologies. A number of these prototypes will be deployed to schools and universities in January-February for feedback. These mini-PCs could be manufactured in South Africa in quantities large enough to accommodate the needs of the educational system of the country.
Read more about this project and the work being done by the High Energy Physics Group at Wits University.
Ends
Issued by:
Erna van Wyk
Multimedia Communications Officer | Wits Communications
University of the Witwatersrand
Contacts: +27 11 717 4023
Email: erna.vanwyk@wits.ac.za
Posted by Bruce at 09:19 No comments: 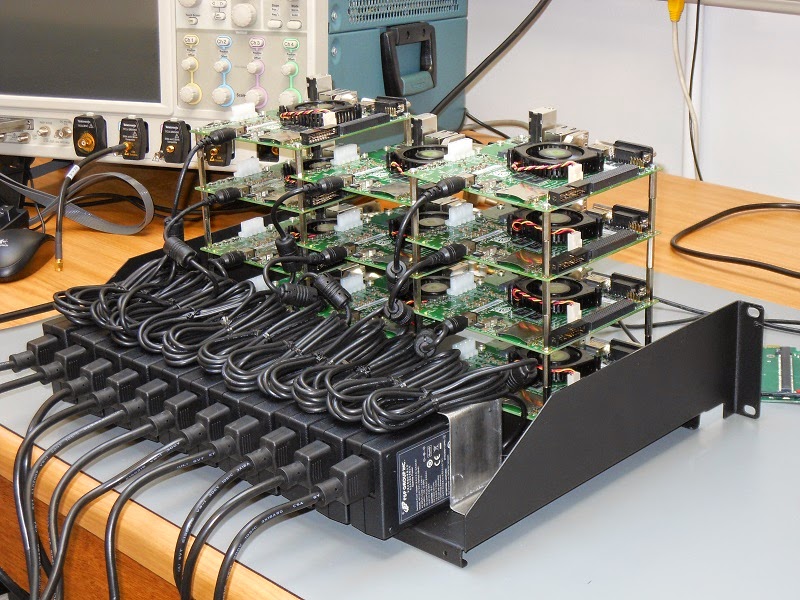 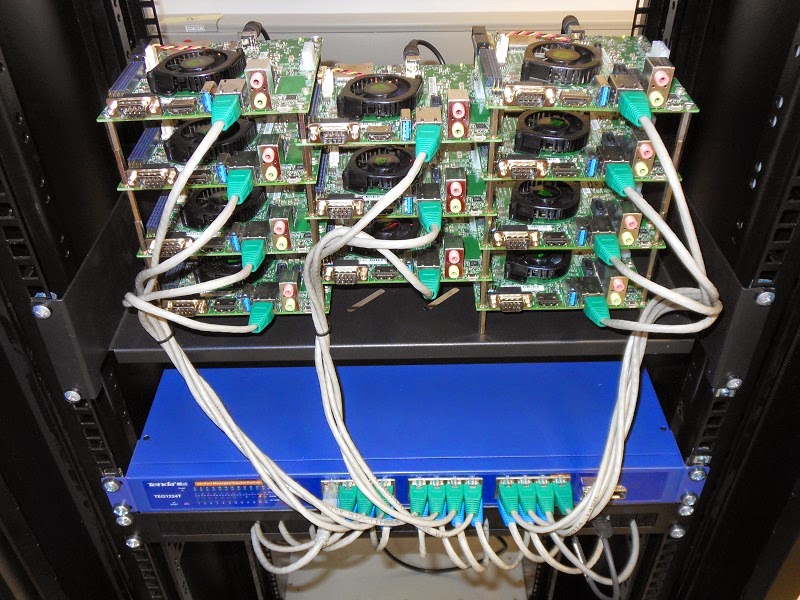 We recently finished setting up a new cluster, but this time we wanted to go for maximum processing power compared to our existing Wandboard Cluster! We opted for the new NVIDIA Jetson-TK1 development boards which hosts the NVIDIA Tegra K1 System on Chip...


The Tegra K1 is a beast: it has a quad-core ARM Cortex-A15 CPU which runs at up to 2.3 GHz with a fifth low power core which is also a Cortex-A15 except it's clock is limited to a few hundred MHz. There is also a 192 core CUDA (Kepler) GPU on the SoC which, according to the spec sheets, can attain about 350 GFLOPS of performance. Preliminary benchmarks of the CPU indicate that High Performance Linpack scores over 20 GFLOPS in single precision!

We have built a cluster with 11 boards, which equates to 44 ARM Cortex-A15 cores (~220 GFLOPS), 22 GB RAM, Gigabit Ethernet and around 3850 GFLOPS worth of GPGPU processing power! The entire cluster should consume less than 200 W of electricity under load.

We have started running benchmarks on the cluster and will report the results soon...
Posted by Unknown at 15:52 2 comments: