CEO Sleepout with the Ambassador of Switzerland.

On July 28th 2016, I joined the Ambassador of Switzerland and almost 200 CEO’s at Nelson Mandela Bridge for the #4Leaders4Change CEO Sleepout challenge to spend the night there to fundraise money while gaining empathy for the homeless. The ambassador’s 3 leaders included myself (Joyful Mdhluli), Zoë Petersen and Balz Abplanalp as seen in the picture below.

The #4Leaders4Change CEO Sleepout challenge managed to raise around 19 million by the night of sleepout with the Embassy of Switzerland fundraising over R217 000 to date. We were given a sleeping bag and cardboard boxes to sleep on after having donated a blanket, an informal outfit including shoes and a book. Coffee and soup was available and could be purchased with virtual money we had to work for by either making sandwiches at the kitchen stalls, taking selfies at the photo booth or knitting blankets.

I met a lot of CEO’s including the CEO of MTN, KMPG, Liberty Group SA and companies I didn’t even know existed. Among the CEO’s I also met the Premier of Gauteng , the Mayor of Joburg, the Minister of Finance, the ambassador of Canada and the Sleepout organizers.

Most of the people attempted to sleep in the cold tar road after 12 am and only a few (including myself) stayed up sitting around the fire.

After spending 12 hours out in the cold, the Minister of Finance addressed the crowd and Mr Tokyo Sexwale announced that he would be hosting the CEO Sleepout next year on Neslon Mandela Day in Robben Island.
The experience has taught me to look at homeless people differently. When I see a homeless person now, I don’t see a dirty person who is annoying me for money but someone who spends every night out in the cold with no food or warm clothes. I barely survived the night while wearing 3 jerseys, 3 pairs of pants and a fire to keep me warm. I definitely have empathy for the homeless after spending the night out in the cold.

All the sandwiches made during the night were all given to over a 1000 homeless people together with all the sleeping bags used, clothes and blankets donated.

It was an honor and a privilege to share this experience with the Ambassador and her team members but I really hope I don't have to do that again any time soon.

More information about the Sleepout

Finally, today we managed to connect all the necessary fibre cables from the Demonstrator module to the Trigger and Data Aquisition System (TDAQ) and took some partial data. In the picture below you will see me (Dingane Hlaluku, Wits University) covering up the barrel modules on top of the table at the Prevessin test beam area. 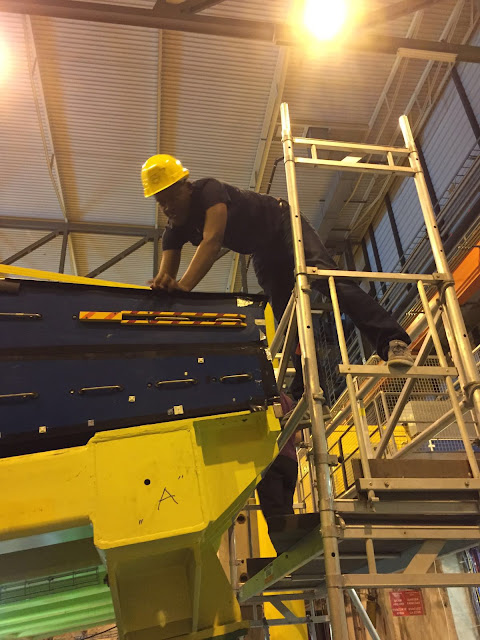 The Table with which the modules are hooked up can be 360 degrees both clockwise and anticlockwise and also laterally to suit the expert's requirements for data taking. This movement can be achieved in 2 ways viz. manually (see picture below) or remotely using python scripts. We have properly setup the positions which will be required for this test beam into the remote control machine as well today so that there will not be a need for shifters to be in the beam area during data taking. 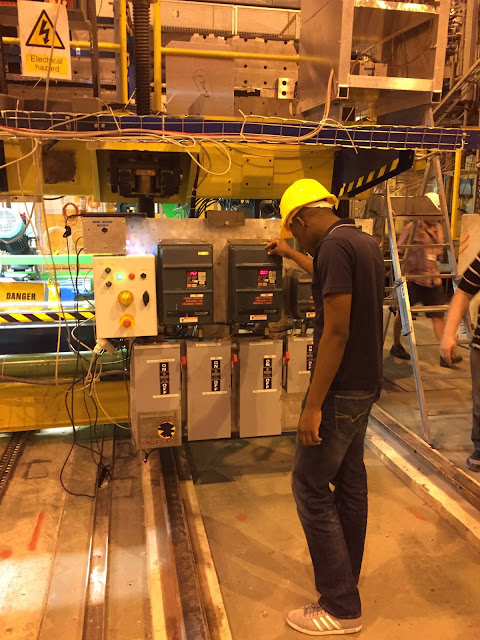 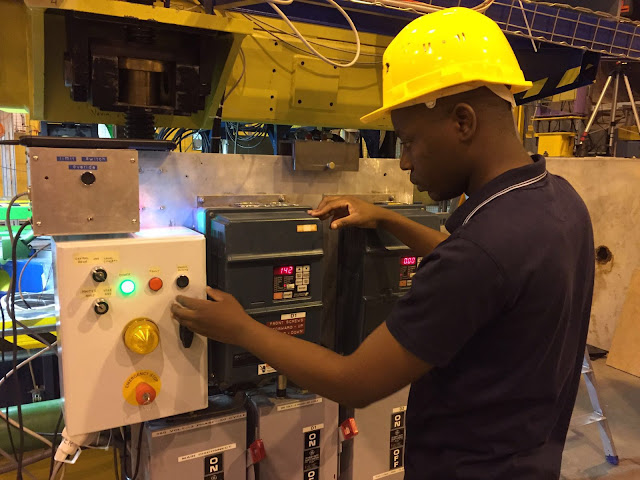 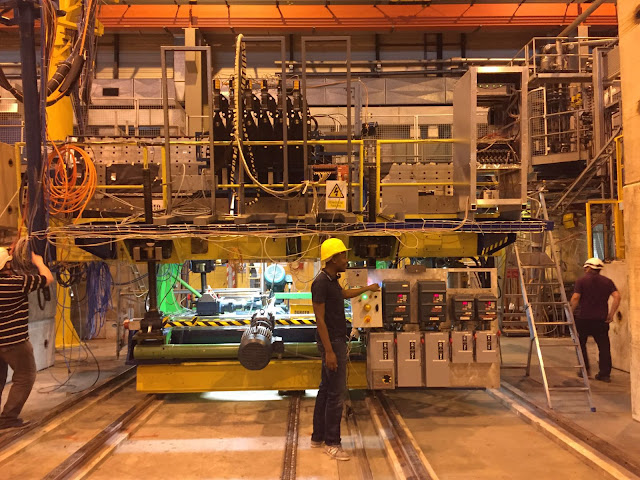 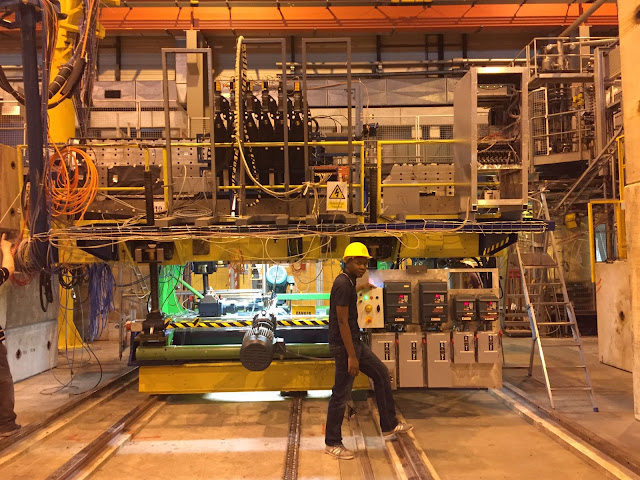 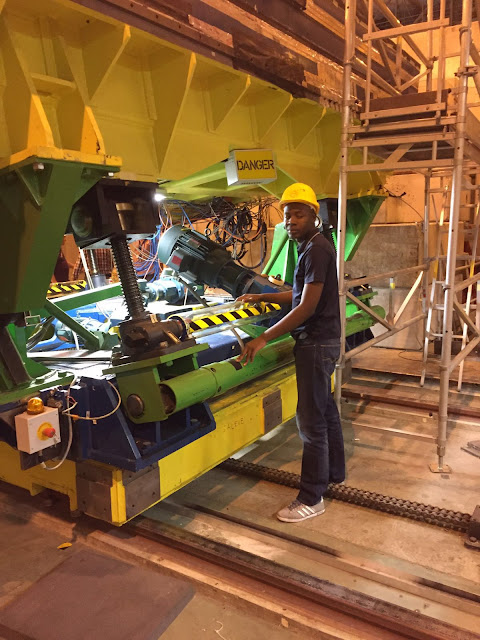 The picture below shows the position of the beam chamber (Beam focused through that purple rectangular quadrilateral). The beam is kept focused whilst the table with the module is moved around. In the picture below is Andrew Matilton (University of Chicago). 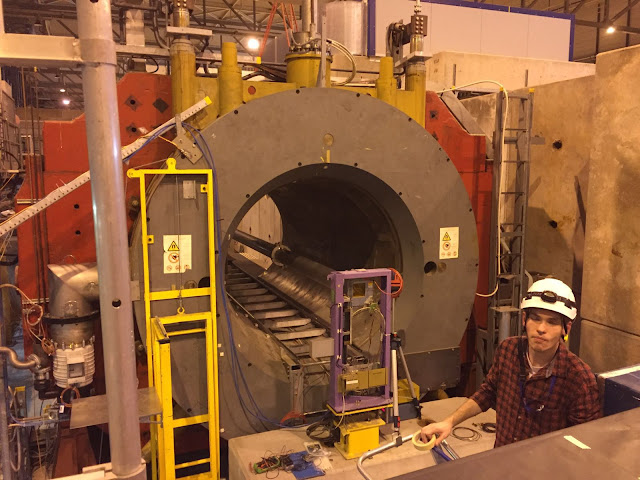 Posted by Dingane Hlaluku at 20:03 No comments:

After several  intense weeks of preparation, the demonstrator inside  the Module JINR65 finally makes it to the TB site.  We had   certainly few glitches  but you can see from the picture attached that  we were ready for everything and neither  a  flat tire    could have stopped us today. Moreover, it seems to works pretty well.  A couple of pictures depicting some of the action from today...

Standing next to the truck with the extended barrel module is Dingane Hlaluku in Building 175 where the module was assembled and tested and it is now being taken to the test beam site at Prevessin. 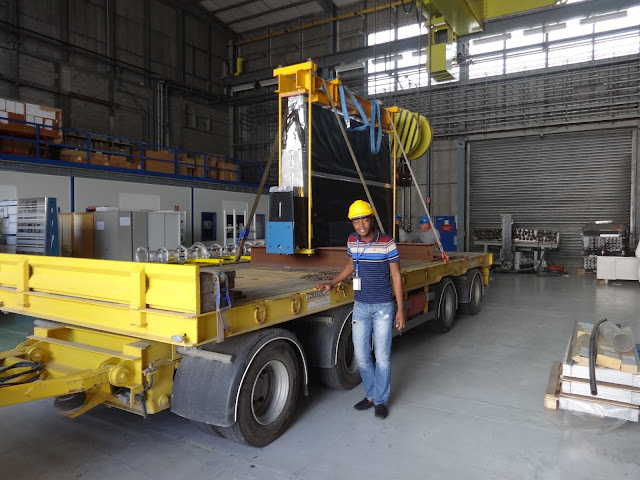 Dingane Hlaluku  (Wits) and Andrew Milton (University of Chicago) closing up the module after inserting the super drawers in Building 175. 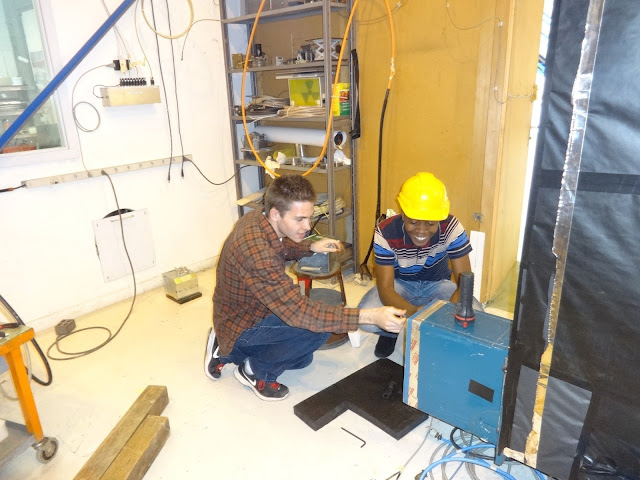 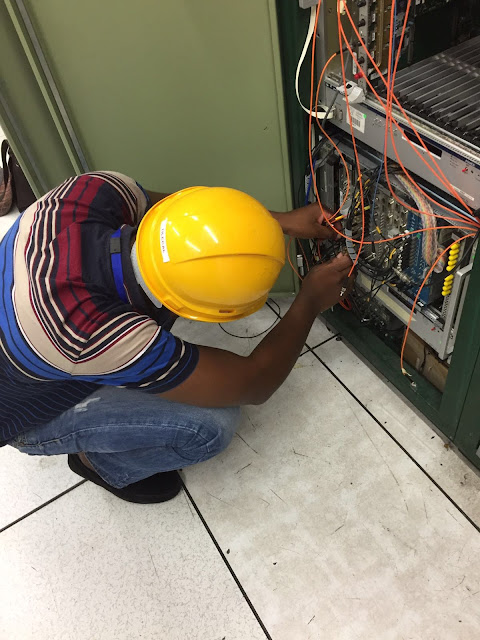 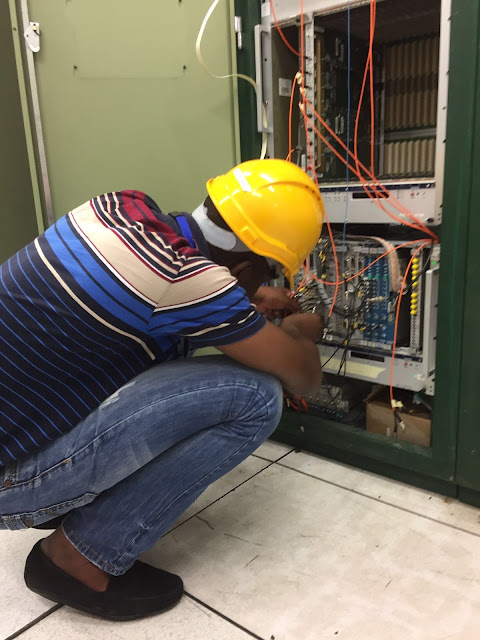 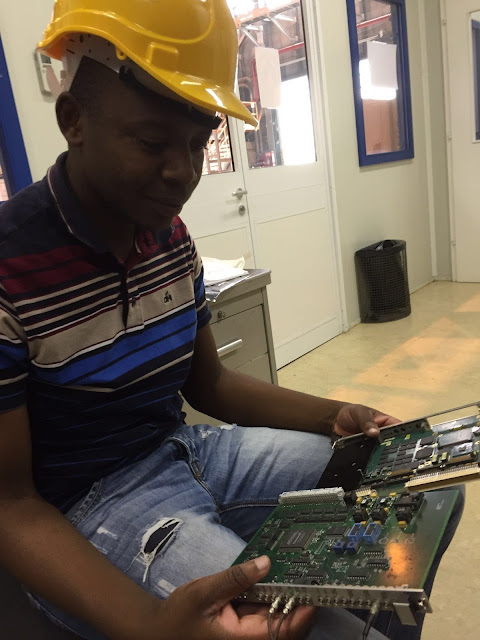 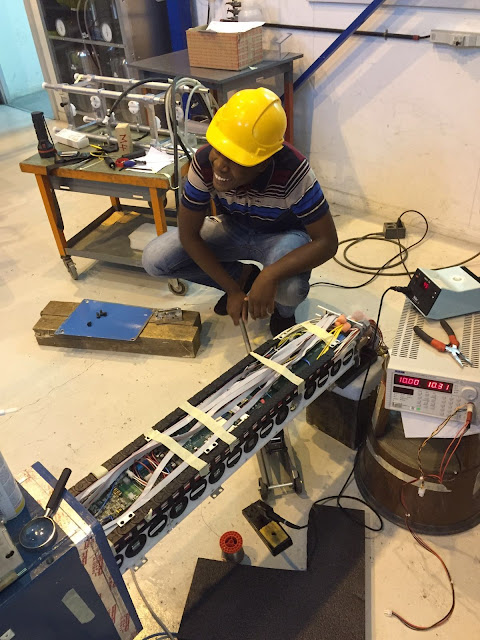 Dingane, Irakli and Jallal in building 175 inserting the Super Drawers into the Extended barrel module. 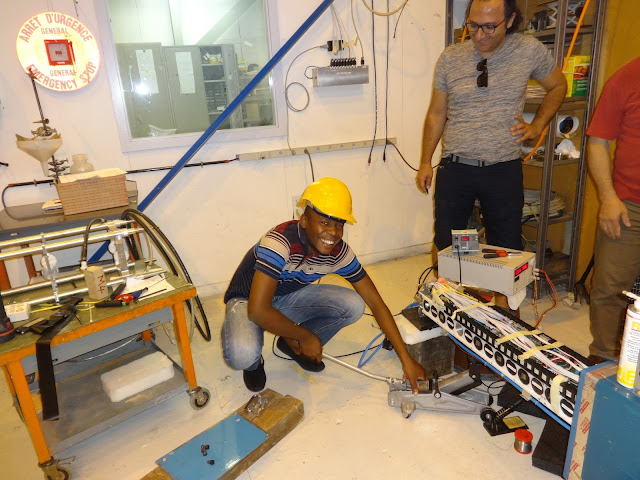 Posted by Dingane Hlaluku at 22:50 No comments:

Some group members, currently stationed at CERN were able to meet with Professor John Ellis. Prof. Ellis is arguably the most cited theorist in our field and an icon in collider physics for many. Enjoy!

Below is the team in Prof. Ellis' famous office 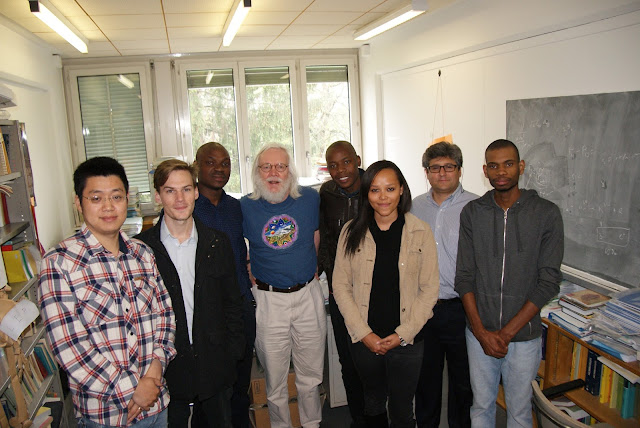 At the Microcosm exhibition at CERN with a picture of the ATLAS detector in the background, 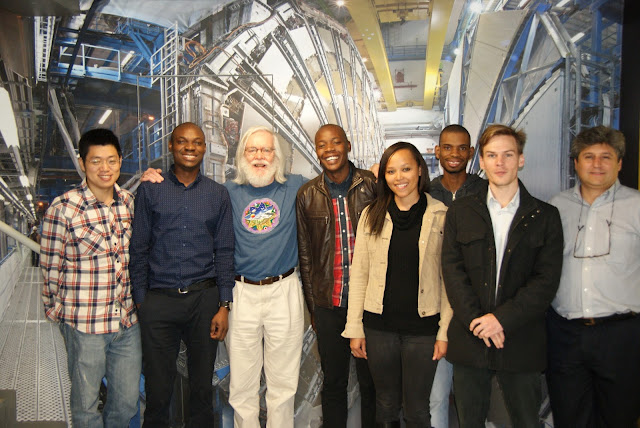 A picture taken with the chamber where the Z and W bosons were discovered, 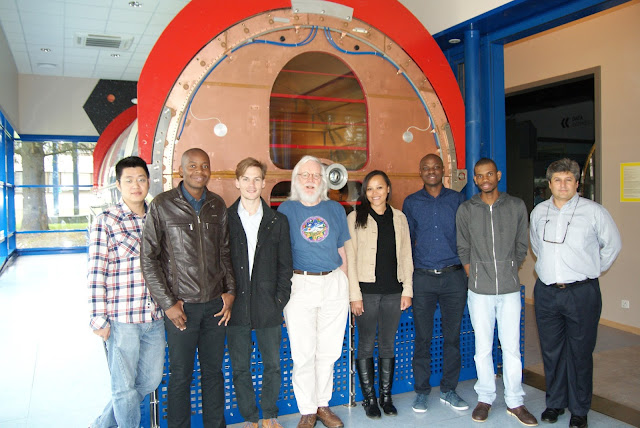 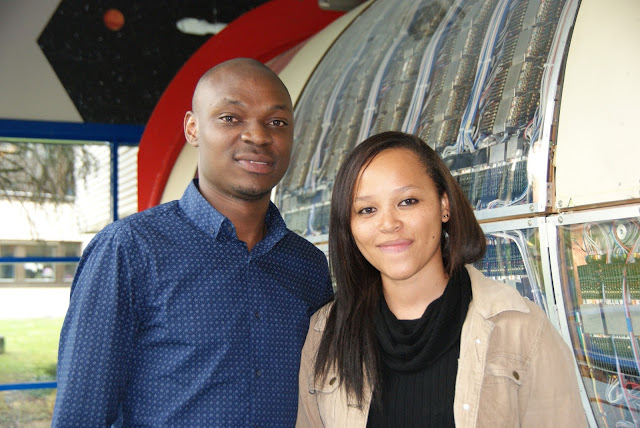 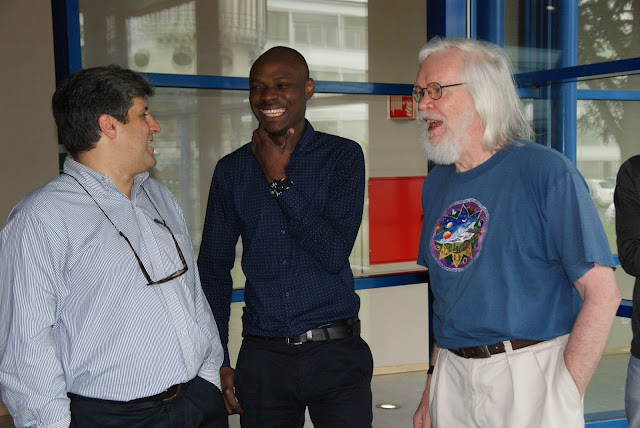 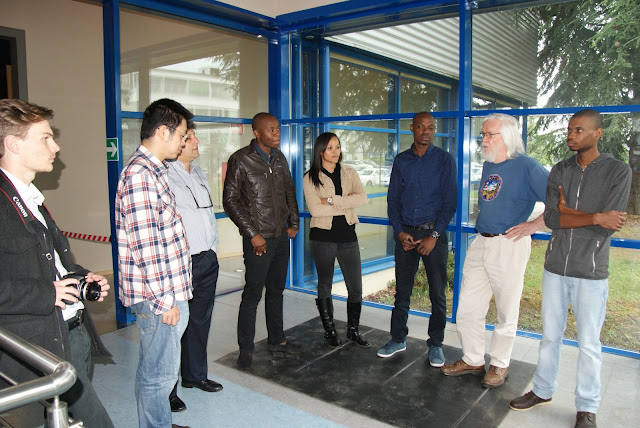 Everything is ready for second High Energy Particle Physics workshop to take place at iThemba LABS - North (Gauteng) February 8th-10th.
The workshop will be opened by the Wits DVC research, Prof. Zeblon Vilakazi, Dr. Daniel Adams from the DST, Prof. Azwinndini Muronga, President of the SAIP,  Prof. Jean Cleymans, Chair of the SA-CERN consortium, and the Head of the School of Physics, Prof. Joao Rodrigues. Following the opening we will have lectures on Quantum Field Theory by Dr. Will Horowitz, on data analysis with ROOT by Dr. Deepak Kar and statistics by Prof. Eilam Gross. Prof. Eilam Gross was a convenor of the Higgs group of the ATLAS experiment when the Higgs boson was discovered in 2012.
The remaining two days will be devoted to presentations by students and young researchers.
For more details you can go to the workshop’s website
http://hep.wits.ac.za/HEPPW2016.php
The agenda is available at
https://indico.cern.ch/event/471180/other-view?view=standard 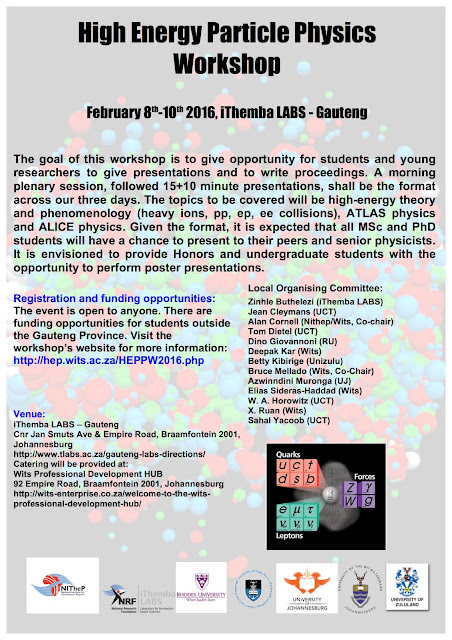