Our community has been shocked by the sudden death of the eldest daughter of Professor Zeblon Vilakazi, Deputy Vice Chancellor for Research and Postgraduate Affairs of the University of the Witwatersrand. Zeblon is a colleague, a leader and a friend. We stand by him in these excruciating moments.

The memorial was a powerful demonstration of love, fortitude, humility and empathy in the face of a terrible loss. 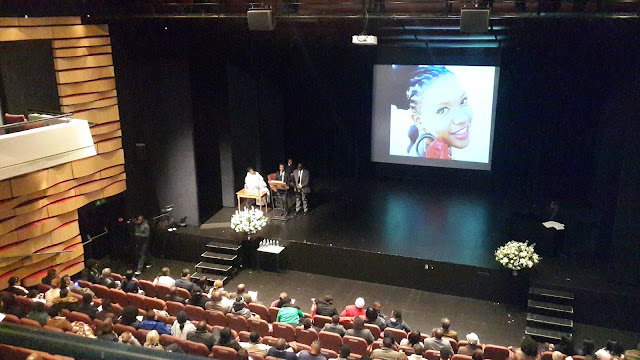 Setting up a virtual machine for data analysis at the LHC

Analysis? I thought you only posted about electronics?

The LHC is now producing data as 50ns bunch crossing and is getting ready to bring that down to 25ns! This means physics analyses are picking up and more people are getting into it. I have been involved in the double Higgs production decaying to di-photon and di-bquark objects. This has involved the development of an analysis framework and more recently the statistical tools associated with it.

I have been working on the analysis code for over 7 months now. Why am I suddenly posting a how-to? Well, my Virtual Machine packed up for some reason and I have to re-install everything so a nice recipe will help me remember things if it happens again as well as for future students and possibly even you.

I am using VMPlayer as my virtual machine. It doesn't matter what you use but I prefer this over virtual box because of the nice tools that come with VMP and I am comfortable with it and its free. You can download it here: https://www.vmware.com/products/player

First up you need to download the ISO of choice to install on your VM. I chose SLC6.6 since it was the latest at the time of writing and its CERN software so I know the analysis code will work on it. Up to you what you wish to use. Here is the link to install SLC6. Try use the 64bit version: http://linux.web.cern.ch/linux/scientific6/docs/install.shtml

I have not tried SLC7. I am too scared to move to CentOS :P

So, once you have downloaded the SLC6.6 64bit ISO we can get started.

Open VMPlayer and create a new machine. Use the ISO as the input disk. I wont go into much detail about the install as its fairly straight forward and you can follow the link.

After putting in a root password we should move onto creating a user. This is where we will create the main user of the VM. Its a good idea to make the user have the same name as your CERN account. This will make life a lot easier when sshing to lxplus or using the GRID etc. On the Create User page fill in your CERN NICE account name. Choose any password. Next.

You should have booted up into SLC6. Now we need to add your user into the wheel group so you can use sudo.

uncomment the # %wheel line by removing the "#"

Add yourself to the wheel group:

Now that you have sudo rights. Lets update the system. This can take long if you are using a remote package repository. If you are in South Africa you can find the mirror repo for SLC at www.mirror.ac.za by scrolling to the bottom. Adding a repo is something you can google :)
The update may take a while so go grab some coffee while this updates.

Player->manage->Install VMware Tools
An ISO should appear on the Desktop
It should either open automatically. If not just google "mount iso in linux"
Extract the .tar.gz file to the desktop.
Open a console and cd into the folder you just extracted
Run the vmware-install.pl executable as sudo
sudo ./vmware-install.pl

I leave everything on default. Now you can drag/drop copy/paste from the host to the VM.

We have a basic working desktop. Now we want to make sure we have an up to date compiler. We make use of the CERN software collections: http://linux.web.cern.ch/linux/scl/#scl12

For some reason python33 doesnt work with the rcSetupTool we install later so stick to 27 for now. We want to enable these packages when ever we start a new bash. So in ~/.bashrc add the following:

Enable the .bashrc by sourcing it then check the version:

and you should see 4.9. For the new analysis code you NEED 4.8 or above. This is important.

DO NOT COMPILE ANYTHING UNTIL THIS IS DONE!!!

If you have done any data analysis you probably have heard of the ROOT package. The latest version can be found here: https://root.cern.ch/drupal/content/downloading-root

After you have downloaded the source code we need to install all the pre-requisites: https://root.cern.ch/drupal/content/build-prerequisites

I normally create a root-src and a root-build directory. This lets me manage which version I am using.
Extract the root source into the root-src directory.

From inside the directory:

Boost is a set of peer reviewed libraries with general functionality. You can download it here: http://sourceforge.net/projects/boost/files/boost/1.58.0/

Now we tell the environment where to find Boost:


Getting things ready for the analysis

So now our machine is almost ready for the data analysis. We have ROOT and Boost libraries installed. Now we just need to do some fine tuning to make our lives easier for updating the analysis code.

A large amount of this is taken from https://twiki.cern.ch/twiki/bin/view/AtlasComputing/SoftwareTutorialxAODEDM#On_your_local_machine_optional

rcSetup is the tool which manages the analysis base. The base is a collection of tools which are used in all areas of an analysis. Calibrations, selections, etc etc.

Lets set it up as follows:
In our .bashrc file we will create a command which is not the default rcSetup but rather rcSetupLocal (To distinguish between the two):

We will be checking out packages using SVN. We will be checking out a LOT of packages and since rcSetup is a wrapper around SVN using SSH we end up having to type passwords multiple times for a single download. Fine if there are two or three but we will be downloading hundreds. So we need to setup the kerberos to fetch a ticket from CERN which will give us an extended period of passwordless use.

You should have kerberos installed already. Check if you have
/etc/krb5.conf

Test the code by typing:

You should be prompted for your CERN username and password. If you do not have the same username then it should query you or else visit here: http://linux.web.cern.ch/linux/docs/kerberos-access.shtml

Now we can start the installation of the Analysis Base. This can take some time. So be patient! You may need to install doxygen so before running:

If at the end some packages do not install you can have a look at the log files and see what went wrong. You can clean and rebuild a single package by typing

Go to the directory where you will be doing your analysis and setup the analysis base:

This is where I download my analysis package HH2yybb:

For an example of running an analysis package (Such as the HH2yybb). You can visit: https://twiki.cern.ch/twiki/bin/view/AtlasProtected/HGam_run2_ggbb#yybb_Analyis_Framework

Its a really good idea to use anIDE. This is 2015 stop using vi, nano and emacs. IntelliSense allows you to see a list of functions and their parameters while you are typing. This will save you LOADS of time so try use it!

I am using CodeBlocks in my VM. Its quite decent and has the functionality I need.

In your main directory. such as my_xAOD_work/
Now you have created the make file we can generate a codeblocks project by typing:
Now open codeblocks and open the project called RootCore.cbp

You should have a working IDE now :)

Four students of the Wits High Energy Physics group have been honored with prizes by the South African Institute of Physics:

Stefan von Buddenbrock and Mitchell Cox, first prizes for MSc oral presentations at the Nuclear, Particle and Radiation track for
"Dark matter production in association with Higgs bosons through heavy scalar resonance at the LHC"

Daniel Ohene-Kwofie, second prize for poster presentation at the Nuclear, Particle and Radiation track for

Chad Pelwan, first prize for poster presentation at the Condense Matter track for

All of these students are a part of the SA-CERN programme.

Few pictures of the happy awardees can be seen below:

From left to right: Daniel, Stefan, Mitch and Chad. 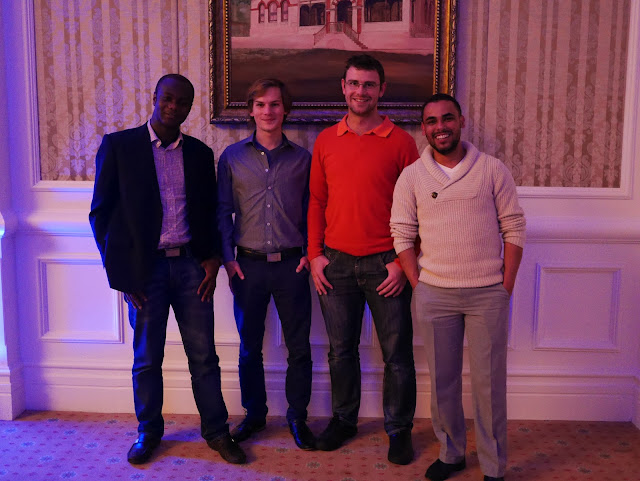 From left to right, Deepak, Stefan, Chad, Mitch and Daniel. 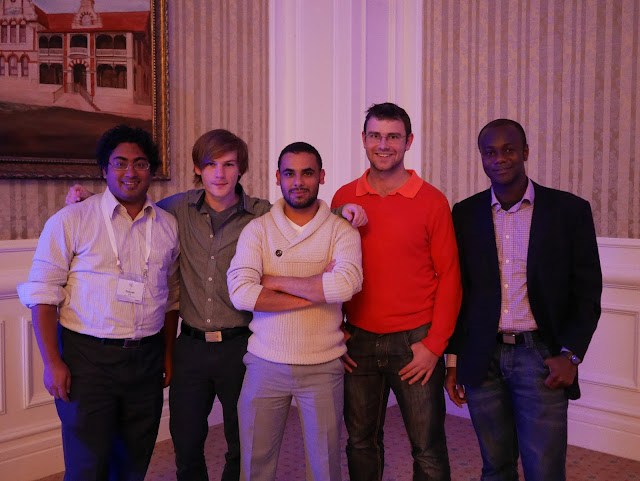